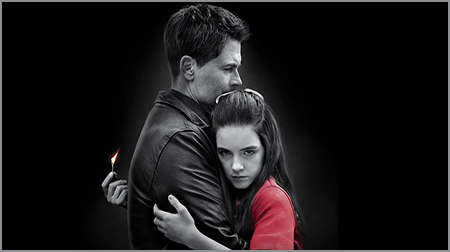 Down Crowd orchestrated and conducted the original music for Rob Lowe’s directorial debut, The Bad Seed.

The Bad Seed is a 2018 American horror drama film directed by Rob Lowe. Lowe is also executive producer and stars in the film, alongside Mckenna Grace, Sarah Dugdale, Marci T. House, Lorne Cardinal, Chris Shields, Cara Buono, and a special appearance by Patty McCormack. The horror thriller is based on the 1954 novel by William March, the 1954 play, and the 1956 film.

Widowed father David Grossman (Rob Lowe) helps his daughter Emma cope with a tragedy when a classmate drowns at her school. Emma initially seems like an ordinary child. However, David begins to wonder if she played a role in the incident, due to the fact that her classmate had won a citizenship medal she coveted.

Further deaths occur, such as her teacher and nanny, and David is forced to accept the fact that his daughter is a cold-blooded killer. After he confronts her, she nonchalantly admits committing the murders.

In desperation, he takes her to an isolated cabin, trying to figure out what to do. After she attempts to kill him, he tries to shoot her to spare her from being institutionalized. At that moment however, the lakehouse’s caretaker Brian believes David has lost his mind and shoots him.

As the police collect Brian’s statement, Emma is taken in by her aunt Angela. As the film closes, Emma embraces her aunt with a chilling expression on her seemingly angelic face.